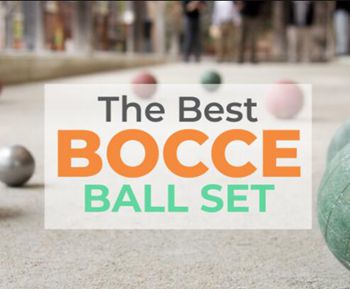 It’s not easy to find the perfect bocce ball sets, what with so many things to consider like price, quality, and skill level. Maybe you’re a league player who needs a professional set to prepare for tournaments. Perhaps you’re a parent introducing bocce ball to their kids and you want a durable beginner set. You might even be a casual player and you only need a basic set to play bocce in the backyard.

No matter how carefully you curate the people attending an event, you can never tell if your guests’ shyness or nervousness is going to result in stretches of silence so excruciatingly long you’ll be wishing you spent the day getting a root canal.

Whatever your needs are, we’ve put together this handy bocce ball buying guide to help you find the right set. 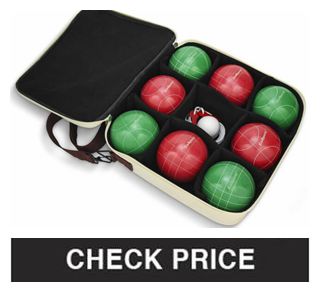 BUT it does strike the perfect balance of being REALLY GOOD in all of those categories which makes it my top pick for casual players who want a quality set at an affordable price.

The eight 100mm balls from GoSports’ regulation set comes in a premium canvas bag with dividers. The balls have a high-shine finish and come in two different colors, with both circle and square cuts allowing up to 8 players per round.

If you go for the GoSports set, you’ll also get a white pallino ball, measuring rope, and a guidebook of the official rules. You can use it for recreational play and for official bocce games.

But honestly, one of the best things about the GoSports kit is the canvas bag that it comes with. It’s lightweight but durable and since there are dividers in it, there’s no risk of you scratching the balls on accident. 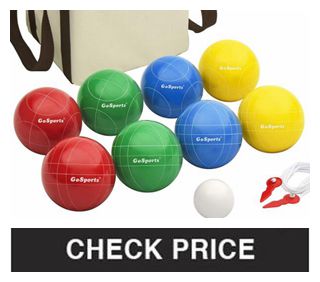 What’s great about this set is that you have the option to choose between two materials depending on how (and where) you’re going to use the balls. The soft rubber material is ideal for play on hard surfaces, while the classic hard resin set is best for soft surfaces. There’s about a $5 difference between the two, with the rubber balls being slightly more expensive.

The set also includes a pallino, a canvas bag, and a measuring rope. At 1lb 11 oz each, these balls are of mid-range weight and are perfect for casual play. Plus, they’re not too heavy for kids either. Another factor we considered is the quality of service you receive after purchasing the set. According to reviews, the GoSports team offers excellent after-sales service and offers prompt replacements for missing or broken items.

In addition, the carrying bag that comes with the set is quite flimsy according to reviews, and it doesn’t really hold up well. You can solve this problem by keeping the cardboard box that comes with the packaging. This will hold up the bag in shape so you can store the balls much more effectively. 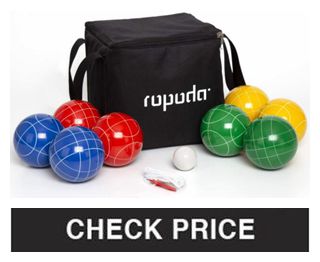 If you’re not messing around here and simply want the top set that your money can buy, then look no further than the St Pierre Sports Professional Set.

This set is the real deal. The Rolls Royce of bocce ball sets. Or would Ferrari be a more appropriate comparison?

Regardless of what you want to compare them to, this set just screams quality. It’s everything that a serious player is after. Its exterior is beautifully glossed with deep, perfectly colored white cuts. The bocce balls are precision-rounded and perfectly balanced.

Obviously, they conform to regulations, so playing with these bad boys is as close to playing in an official tournament as you’re going to get.

Yes, they are expensive. But man, they are worth it. This set oozes class and one gets the impression that if the IOC toyed around with these for an afternoon, bocce ball would be in the next Olympic Games.

Alright, enough of the learners set. It’s about time we go down to business to some heavy-duty stuff. And the Baden Champions Bocce Ball Set is that just if you are looking for something a little more professional.

The Baden Champions Bocce Ball Set is no joke. This set is designed and made to be used to train and train the best. This set contains 8 bocce balls in the classic, no nonsense red and green colors. You also obviously have a white jack. The balls have multiple scoring patterns and are made form high quality Poly-Resin which resist breaking and cracks. Great on yards and non-sandy surfaces. The Baden Champions Bocce Ball Set is made to the regulation size, which is 107mm for the bocce balls and 60mm jack. They also have the proper weight of nearly 2 pounds. Perfect for experts and pros.

In the portable and handy carrier bag, you will also get a measuring tape. But that’s not all you come home with. The Baden Champions Bocce Ball Set also comes with a 90-day satisfaction guaranty! That’s a great deal, if you ask us. 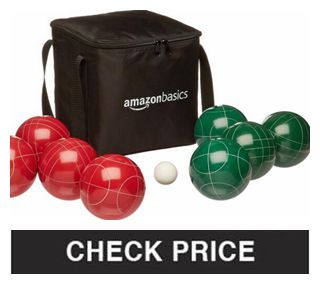 Some experienced campaigners love the feeling of heavy bocce in their hands. The sense of heft and the satisfying connection a heavy ball makes with the surface, pallino, or other balls can be extremely satisfying.

Of course, if you’re using a very heavy ball, the build quality of the set must be able to support this level of impact. In the case of Amazon’s own product, we can definitely vouch for the quality. The poly-resin composite material these bocce balls are made from is more than durable enough to withstand intense impact.

If the heaviness and size of these bocce balls seem a little intimidating, but you like the AmazonBasics brand and other aspects of this set, there is the option to select a slightly smaller (90mm) and lighter set. The price difference between these two differently-sized sets is minor.

What Does the Bocce Ball Sets Contain?

While traditionally the balls come in red and green, you can also see other color variants and up to four colors in a set.

More expensive bocce sets may include additional accessories such as a measuring tape (to precisely determine who is closest to the pallino/jack) or a much fancier carry-bag or case which can be leather, canvas or a timber box.

If you pay good money for expensive, quality bocce balls, then it can be worthwhile to invest in a quality case to protect your new balls. Just keep in mind that fancy cases will often add additional weight to your new bocce set.

Despite official bocce ball tournaments having a very specific set of rules, part of the fun of playing casually is that players can make tweaks as it suits the crowd taking part in the game.

You’re welcome to think of these rules as a guide to developing a ruleset that suits your desires.

Having said that, let’s take a quick look at a simplified version of the official rules of a game as it’s played on a standard bocce court.

This buying guide should be able to give you a better idea of what to look for in a bocce ball set based on your skill level and how you’re going to use it. You can then use our list of the 12 best bocce ball sets to further understand what options you have. The list contains everything from the top professional bocce ball set to the best-lighted bocce ball set for a fun night at the beach.